Peasant woman at a well

Wagemans was originally a home and decorative painter. At a certain moment he decided to take up the palette. He mainly painted many cityscapes and sometimes harbors, although landscapes and still lifes are also known of him. His field of work was in The Hague, his birth and residential city, where he also produced various versions of his most famous painting, the Prison Gate. He also painted scenes in Rotterdam, Amsterdam, Haarlem and Delft (Oostpoort), among others.

Most of his paintings are large. His work usually has such a high quality that in the past his paintings (the signature) were forged to J.C.K. Klinkenberg, a painter with a larger stature and therefore pricing. In professional terms, Wagemans is also called a “colorist in traditional-realistic style”. Less known is that he also made mosaic.

His work is still offered at auctions and galleries, more often in the USA then in the Netherlands. Wagemans is also described in “De Scheen”, lexicon for dutch artists. 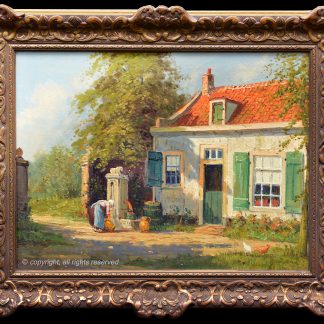