Was an Amsterdam merchant and painter, who sold his own works and lived off the proceeds. He sold his paintings to companies, at exhibitions and markets, in hotels and in his favorite café.
He mainly painted Amsterdam and Paris cityscapes, seascapes, flower still lifes, mountain landscapes and winter landscapes.

Kelderman was a very productive painter: he made an estimated more than 5,000 paintings (or at least signed). A considerable part of this is formed by scenes that he produced in numbers. In many households in the Netherlands you can find a painting by this artist. He lived and worked in Hilversum and Amsterdam. From 1946 to 1950 he worked in Laren, after which he moved back to Amsterdam. 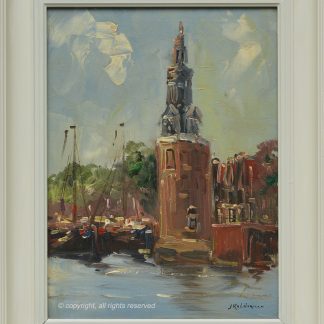